Solving for Optimal Annealing Schedules through the Coherent Ising Machine

Optimizing energy use and consumption serves a vital purpose when creating effective computational systems, but determining the best annealing schedule can be a significant challenge. Scientists have discovered ways of solving for the best annealing values by increasing laser power in the system and studying resulting phase transitions in the geometric landscape.

In his talk at Upgrade 2021, the NTT Research Summit, Surya Ganguli, an Associate Professor of Applied Physics at Stanford University and Research Scientist at Facebook AI Research (FAIR), discussed how to determine the optimal annealing schedule of an optical parametric oscillator, or OPO, by use of the coherent Ising machine (CIM) in the context of the SK Spin Glass model.

“This is a combinatorial optimization problem involving minimizing the energy function,” Ganguli said. “Many, many combinatorial problems of interest can be encoded in terms of this Ising energy landscape.”

As computational problems increase in difficulty, it’s harder to determine the right annealing schedule to get the best configured OPOs, which leads to the fastest and lowest energy-cost solution. The SK Spin Glass model is a prototypical example of a challenging optimization problem. To solve for the optimized annealing schedule, Ganguli and his team of researchers had to first determine where the local minima and the global minimum lie within the system.

Starting the problem with a large amount of laser power causes roadblocks at the local minima and global minimum for gradient descent. To overcome this bottleneck researchers began the system at low laser power and gradually increased it over time. This led to observable phase transitions within the SK Spin Glass model geometry landscape. These phase transitions are direct indicators of the optimal annealing schedule.

“As the system anneals, gradient descent moves along the surface of the SK Spin Glass model,” Ganguli said. “That’s the major take-home message that I want you to get, which provides a conceptual explanation potentially of why annealing works for the CIM.”

The result of an optimized annealing schedule is an increase in system size while simultaneously decreasing the energy configuration.

Although these results were found in the context of one specific optimization problem, the findings demonstrate immense potential for using the CIM to solve ​​high-dimension optimization landscapes.

“This is a very fertile area for the interaction between physics, mathematics, even some neuroscience and dynamic mean field theory and so forth,” Ganguli said. 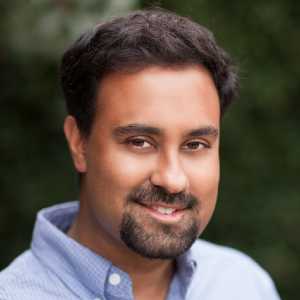 Surya Ganguli triple majored in physics, mathematics, and EECS at MIT, completed a PhD in string theory at Berkeley, and a postdoc in theoretical neuroscience at UCSF. He is now an associate professor of Applied physics at Stanford where he leads the Neural Dynamics and Computation Lab. His research spans the fields of neuroscience, machine learning and physics, focusing on understanding and improving how both biological and artificial neural networks learn striking emergent computations. He has been awarded a Swartz-Fellowship in computational neuroscience, a Burroughs-Wellcome Career Award, a Terman Award, a NeurIPS Outstanding Paper Award, a Sloan fellowship, a James S. McDonnell Foundation scholar award in human cognition, a McKnight Scholar award in Neuroscience, a Simons Investigator Award in the mathematical modeling of living systems, and an NSF career award.