Nonlinear nanophotonics have various possible uses in the field of quantum optics, including work currently underway towards using nonlinear optics to reach few-photon interactions. While these interactions have yet to be achieved, progress in this facet of research could lead to breakthroughs in solving complex optimization calculations using a Coherent Ising Machine.

In his talk at Upgrade 2021, the NTT Research Summit, Dr. Martin Fejer, Professor of Applied Physics at Stanford University, discussed nonlinear nanophotonics operating in thin-film lithium niobate (TFLN) and how material characteristics like tight confinement, high resonator values, and the engineering of dispersion could theoretically lead to few-photon interactions in optical physics.

“In recent years, the ability to implement these devices in nanophotonic devices, tightly confining wave guides with ferroelectric domain patterning, has emerged as an important tool,” Fejer said.

When light passes through TFLN, the beam is nonlinear due to the physical structure of lithium niobate. Light is absorbed into the material, but in order to prevent using excess energy within the system, the light must be concentrated in a small area to increase intensity – known as tight confinement. The thin-film gives more control of the photons and increases interaction length in a confined area.

Although TFLN has opened doors to further understanding quantum optics, multiple limitations must be overcome in order to achieve the few-photon interactions. In the theory presented in his talk, Fejer explained how shorter wavelengths of light, limits on resonator Q, and synchronous pumping, could help address those limitations. The end goal is to have more control over the directionality of the photons in the light.

“A strong push to shorter wavelengths, and combining those pulses with resonant enhancement and so-called synchronously pumped geometries, can combine the enhancements of resonance, low losses, and the increased pulse intensity of short duration pulses,” Fejer said.

Although the research community has seen significant strides in the field of nonlinear nanophotonics, scientists have yet to achieve successful few-photon interactions.

“We’re not there yet,” said Fejer, “But we have some significant steps that show great promise that we’ll get there in the not-too-distant future.” 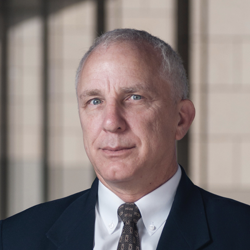 Professor Fejer joined the Stanford faculty in the Department of Applied Physics in 1986. His group’s current research is in the fields of nonlinear, ultrafast, and guided-wave optics, micro- and nano-structured ferroelectric and semiconductor media, and precision optical measurements, with current projects in classical and quantum optical signal processing, ultrafast optics, efficient generation of coherent visible and infrared radiation by waveguide and bulk optic frequency conversion, precision interferometry for gravitational wave detection, and characterization of materials with low-dissipation.