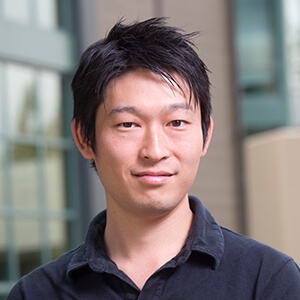 In the video below, Yuichiro Kamada discusses Dynamic User Competition in the Bitcoin Market.

The working of the Bitcoin market must nowadays be of interest even to non-specialists. At UPGRADE 2021, NTT Research Scientist Yuichiro Kamada (who is also an Associate Professor at the UC Berkeley Haas School of Business) presented a piece of joint work with Prof. Shunya Noda (University of Tokyo) looking at the future stability of the market and using game theory to model the behavior of users and miners under future conditions.

As is widely understood, Bitcoin transactions from users are recorded by miners, who use computing power to solve puzzles and are rewarded with the capacity to record transactions in blocks. Each block can hold a fixed number of transactions K; currently K=3000. Users pay a small fee to miners for each transaction recorded, and it is the user who decides the size of the fee. Naturally the user wants to have transactions recorded quickly and cheaply, while the miner will select the K most rewarding transactions to fill the block. Therefore, a market emerges.

A second reward to miners is the issue of extra Bitcoins for this work, but by design this reward is being reduced through time, and in about 120 years will reach zero. The question examined by Kamada and Noda is whether the market can be stable without this second reward.

By considering a small set of parameters (λ, the rate of success of all miners; W, the number of transactions processed to date; time t; and K), Kamada defines a function f describing users’ bidding behavior. Adding a parameter c, the cost to a miner of working, another function defines the reward to a miner. He states a theorem that (with c=0) there exists a perfect Bayesian equilibrium with such an f and shows that the payoff to the user has a unique stationary distribution as long as λK>1.

He also shows that as long as c>0 there will be periods when miners perceive it not to be worth working. This is significant because if no miners work, the market is susceptible to attacks. How λ and K affect the point at which miners become willing to work is stated as the subject of future work.

Yuichiro Kamada is a Scientist at NTT Research and an Associate Professor at Haas School of Business of University of California, Berkeley. He received a Bachelor degree in Agriculture at University of Tokyo in 2007 and then a PhD in Economics at Harvard University in 2012. After spending a year at Cowles Foundation of Yale University as a Postdoctoral Associate, Dr. Kamada came to UC Berkeley as an Assistant Professor in 2013. He was tenured and became an Associate Professor in 2019. He is a game theorist and does research on various areas: dynamic games, search theory, political economy, learning in games, strategic communication, social networks, market design, and marketing. He is also an associate editor of Theoretical Economics, one of the top journals in economic theory. As a Scientist at NTT Research, he aims to apply his expertise on strategic interactions to the analysis on various aspects of blockchain.