Research That Matters – A Conversation with Dr. Michael Fraser 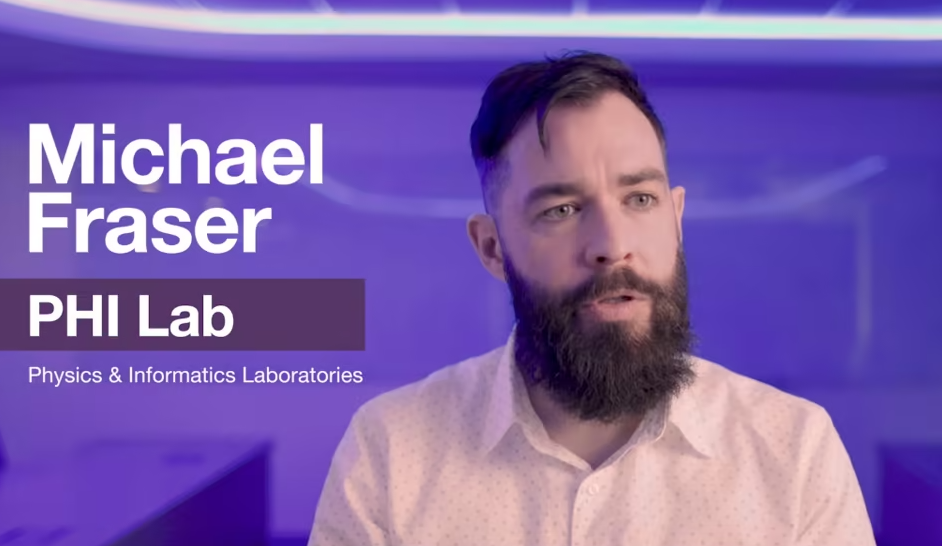 Dr. Michael Fraser is a Senior Research Scientist in the Physics and Informatics (PHI) Lab, where he focuses on condensed matter physics using optics. He joined the PHI Lab in 2019 and concurrently holds a position as a researcher at RIKEN, the large scientific research institute in Japan. Dr. Fraser received his Ph.D. at the Australian National University in 2010 and a B.Sc. in Physics and Physical Mathematics and B. Eng. in Microelectronics Engineering from Griffith University in 2002. He has co-authored numerous papers with PHI Lab Director Yoshihisa Yamamoto, whom he met while a Fulbright Fellow at Stanford University. At NTT Research, he has helped design the optics laboratory at the organization’s new Sunnyvale facility. Please read on to learn more about Dr. Fraser’s background and area of research.

In your NTT Research video, you mention being amazed early on by the idea of being able to control atoms. Could you tell us more about how your interest in physics evolved?

As an undergraduate, I began working on research projects in the areas of cold atom physics and also in semiconductor device/materials physics. I was fortunate to meet many enthusiastic researchers in Australia and was exposed to cutting edge research facilities in these areas early on in my career. I went on to combine these fields during my Ph.D. and thereafter, working on coherent fluids of electronic excitations in semiconductors, such as excitons and exciton-polaritons.

Amongst the various research fields I have worked in, one of the most fascinating phenomena I have continually come across is the concept of emergent complexity: that new physical states of matter and even completely new types of particles can arise from the correlated behavior of a many-particle system. Often, the specific atoms which make up the system may be largely neglected. We may even use photons, particles of light, to make artificial states of matter – in some cases with quite some advantages! Thus, what we are looking for initially are these new states of matter, engineered through precisely constructed samples and experimental measurements, and from there, new particles (or more accurately, quasi-particles) may emerge which have entirely distinct behavior from the usual particles that we interact with in the real world.

Several of your most highly cited papers also have “exciton-polariton” in the title. Could you briefly define this type of matter? Why did you decide to study it?

Exciton-polaritons are an example of a type of quasi-particle which emerges from a many-particle system – in this case a semiconductor microcavity structure in which electrons, holes and photons interact in just the right way to form a new particle (termed an exciton-polariton), having composite properties of its constituents. These are quite versatile particles, in that they consist of half light and half matter, and they have the properties of both. For example, while bare photons do not typically interact strongly, exciton-polaritons may have strong interactions; thus, they might be very useful for creating new photonic states of matter, such as a photonic fractional quantum Hall effect, in which strong interactions are crucial.

While many interesting many-body phenomena have been studied in exciton-polaritons such as Bose-Einstein condensation and superfluidity, polaritons have now become a mature and useful photonic platform that can be finely tuned by combining various novel materials and nanostructures and might be used to create new, further exotic states of matter that are extremely challenging or elusive with other techniques.

Is this hybrid or exotic state of matter related to the Coherent Ising Machine?

In general, we are searching for optical platforms in which emergent quantum matter might be robustly realized. One specific area I am particularly interested in are platforms supporting anyons – particles with fractional exchange statistics, i.e., neither fermions nor bosons, but something in-between. These particles are entirely unique from all other particles which we usually deal with and have generated considerable research interest not only because of their exotic fundamental nature, but also for several anticipated applications of anyons in new quantum information technologies. While strong experimental evidence of these extremely fragile particles has been recently found, many details of their existence and especially, the properties of more exotic variants termed non-Abelian anyons, remains elusive. Despite this apparent difficulty, we understand well how anyons might in principle be artificially engineered. Finding a suitable platform to robustly realize anyonic states of matter, however, still requires major new developments in materials and experimental techniques.

In optics, in particular, there are many platforms we might use, all of which have distinct advantages. Polaritons for example, have the advantage of strong interactions, a key requirement to create a photonic fractional quantum Hall effect, which supports anyonic excitations. We are also exploring other photonic platforms and strategies to achieve these same goals. For example, implementation of topological models in a time-multiplexed optical resonator network (similar to the CIM) is a distinct methodology with the unique feature of being able to to engineer non-local interactions, which makes this an exciting platform to study in the context of lattice bosonic quantum Hall effects. At NTT Research, we are exploring a wide range of optical platforms, including microcavity polaritons, optical resonator networks, superconducting microwave resonator networks, optical lattices of atoms, and others. This breadth of approaches is further facilitated through our strategic partnerships with external institutions including Caltech, MIT, Stanford University and RIKEN.

What other subject areas are you exploring?

Some of the fundamental problems we are seeking to solve initially in our new Sunnyvale laboratory include:

Could you tell us a little about the new lab that will enable you to continue your work on fundamental physics?

Although our new Sunnyvale optical laboratory supports several research teams and projects, a specific design focus for my research group was to provide a state-of-the-art facility to experimentally create and study many-body states of light. One of our major targets is to engineer a bosonic fractional quantum Hall state using light, which might potentially lead to a platform robustly exhibiting anyons. We anticipate that such a challenging goal requires precise optical control, extreme conditions including low temperatures and large magnetic fields, as well as advances in materials and innovative device design. Our new laboratory at Sunnyvale is uniquely positioned to approach these challenges, combining in the same laboratory space advanced material and device fabrication, together with ultra-low temperatures, high magnetic fields and new schemes for optical manipulation and measurement.