Strongly-correlated phases of matter frequently lead to emergent phenomena beyond that of the constituent materials. Prominent examples include high-temperature superconductivity and the fractional quantum Hall effect. In the later case, the combination of non-trivial topology with strong electron-electron interactions leads to fractionalized excitations known as anyons (F. Wilczek Phys. Rev. Lett. 49, 957 (1982)).

Anyons are strikingly unique particles in (usually) two-dimensional quantum condensed matter, where their physical properties such as charge, spin and mass may become fractions of that of whole particles. The exchange of two such particles (see figure 1), in stark contrast to the strictly fermionic and bosonic statistics in three-dimensions, leads to anyonic statistics, where the exchange phase can take nearly arbitrary value. In more exotic non-Abelian anyons, this exchange operation may even be represented by a unitary matrix. The depth of unexplored fundamental physics in ‘anyonic matter’ and potential applications in robust quantum information infrastructure makes the search for an accessible anyonic platform a challenging but exciting field at the forefront of condensed matter physics.

Anyons are typically rare, fragile — and it is difficult to measure and control particles. But pursuit of them in optical and hybrid systems might make them more robust and amenable to study. Fortunately there exists an abundance of potential implementations employing artificially structed topological models in almost arbitrary physical systems (e.g. M. Aidelsburger et al. CR Phys 19, 394 (2018)). We target novel topological photonic and hybrid platforms such as time-multiplexed optical pulse networks (see figure 2). In this case, the ability to control interactions between any pairs of non-neighboring sites is an enabling feature for the implementation of key topological models.

Key areas of current research include: 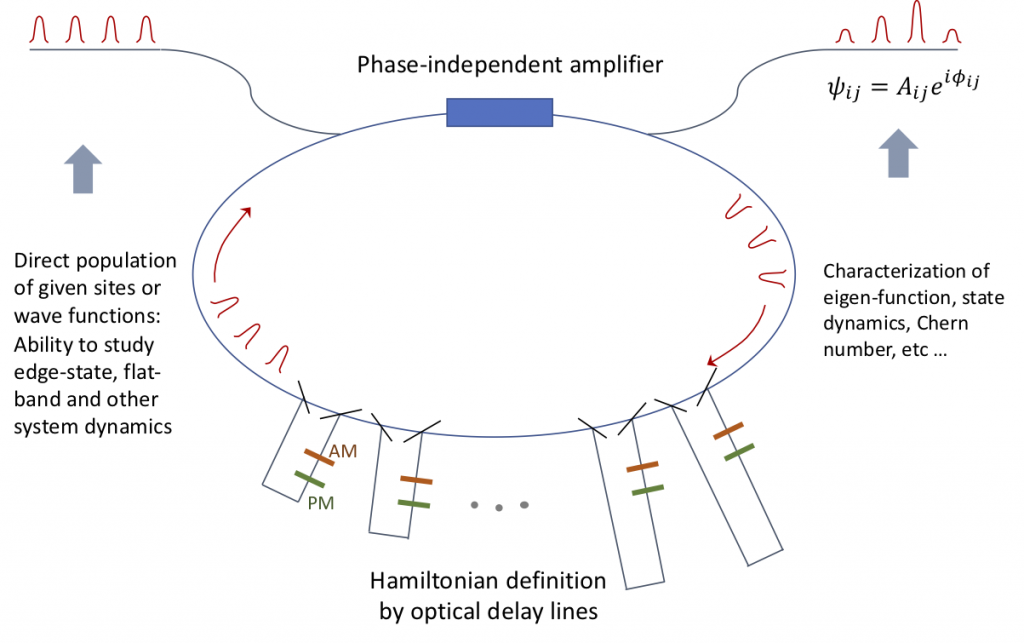